View our latest information and advice on Coronavirus
Projects

This planted earth sculpture of a warthog’s head located in woodland behind the Summerhouse Café was originally lovingly created by the in-house gardening team in 2001. The feature was inspired by a horticultural feature seen in the Lost Gardens of Heligan, Cornwall.

Your donations received through a Bute Park Improvement Project initiative in 2020/21 have helped protect and restore him to his former glory.

Your donation has helped protect and restore him to his former glory.

The profile was re-established using recycled earth, and he was re-planted by our gardeners, volunteers and horticultural apprentices. Various ornamental grasses were used to give the impression of fur (Hedera helix and Pachysandra), black eyebrows (Ohiopogon planiscapus “Nigrescians”), a colourful billowing mane (Luzula sylvatica, Stipa tenuissima, and Crocosmia aurea) and a mohican (Miscanthus sinensis “Zebrinus”).

The origin of “Pumba”

Assistant Manager for the South-eastern district, Roy Hutchins conceived the idea after visiting the lost gardens of Heligan and seeing “The Giant’s Head” back in 2000.

In preparation, soil generated from maintenance of the city’s bowling greens was stockpiled. The warthog design came about organically; there was no particular reason for it. Grounds Maintenance Area Manager, Will Power, created the profile of the head and carved the wooden ears and nose. Working Supervisor, Dave Hutchins created the eye mosaics using broken tiles and bicycle reflectors as the glint in his eyes! As a warthog, the feature gained the nickname “Pumba”. In 2012 the timber elements were replaced using cedar wood from a diseased tree in Roath Park. It was at this point the tusks were added.

The changing face of “Pumba”

The warthog has had several hairstyles over the years. 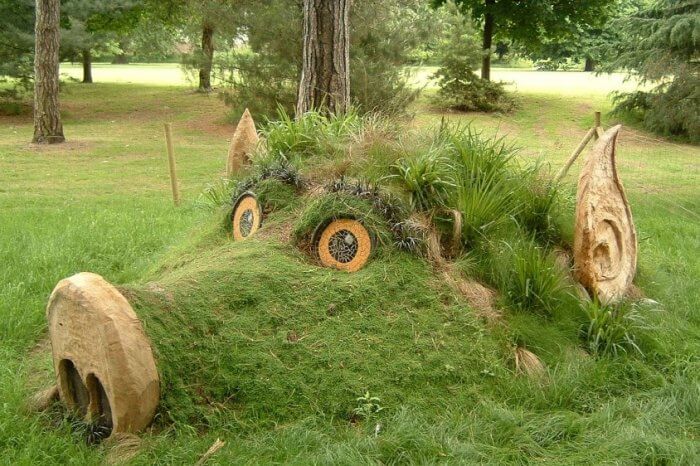 Photo from 2002 showing Pumba in the first summer after he was first created.

You can find “Pumba” behind the Summerhouse Café hidden amongst the trees by the Woodland Play Trail.

This project is no longer accepting donations. View current projects.

We'd like to say a massive thank you to the organisers of @xmasatbutepark for inviting our families and staff along to enjoy the illuminations this year. They enjoyed some quality time together, making new memories and remembering our loved ones who are no longer with us.

It's been great to hear how people are talking about our #ArtWorkers scheme at such a prestigious event @xmasatbutepark
Check-out the great pic in this article of Lucie, who's been with us since she was 12-years old.
https://businessnewswales.com/wales-creatives-unite-for-its-biggest-ever-festive-lights-trail/

Guided walk around Bute Park looking at the fascin

Connect to nature. Sign up now for your free Big